Two weeks ago, I wrote about what went right and wrong with my son’s elementary school career day last year. After participating again this year–this time with a shiny new PowerPoint, plus actual cover art and interior illustrations to show off!–I have a whole new set of lessons.

Have a PowerPoint (or something similar) if you don’t have cool props. Mine wasn’t anything fancy, but just giving the kids something to look at was a big improvement. It helped that because I was talking to elementary school kids, I could use goofy clipart without worrying that someone would roll their eyes. It also helped that, as a picture book author, I was talking about a book with inherent visual interest. I could show an illustration with the original text, talk about how the text and illustration didn’t quite match (the poem referenced “skeletons” and the illustration showed a single skeleton), and solicit opinions on how to fix it (get the poor illustrator to completely redo the illustration . . . or just lop the “s” off “skeletons”). The kids loved that. A chapter book would have been harder.

Sidebar on the goofy clipart: Open Clipart Library is way too white. This school is only about 10% white and I wanted my presentation to reflect that, but “child reading” got me a whole lot of white kids. (“Reading” got me eight zillion white people, a few African-American adults, and one little brown-skinned girl who looked like she was being forced to read against her will.) If you want to contribute to OCAL, take note. 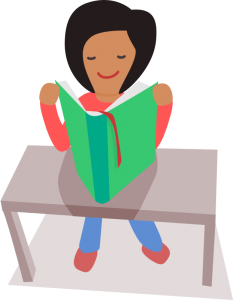 She’s racially ambiguous, could pass for a teenager, and seems to be enjoying herself, so she’s in! (Credit: Open Clip Art Library)

But have a backup plan. Some of the classrooms had computers hooked up to projectors. Others had computers with an overhead projector haphazardly focused on them, so the kids could kind of-sort of-see a grainy image of the PowerPoint on the screen. Others had nothing. Practice a version of your presentation that doesn’t involve the PowerPoint (instead of showing the illustration, I could say “And he only drew one skeleton! How could we fix it?”), and bring a printout to remind yourself of your talking points if you don’t have a screen to look at.

And keep bringing props. My week was a Lovecraftian dive into madness, so I didn’t have time to handpick book props like I did last year. Next time, I’m making that a priority, because the kids do like having something tangible to look at. In the first-grade classrooms, they had free-reading baskets on the table and I could ask them to grab a book and check the spine for the publisher’s name. In the fifth-grade classrooms, I didn’t have that option, and I wished that I had a copy of Harry Potter and the Sorceror’s Stone or Mummies in the Morning handy so I could show them the spine myself. (Of course, next year I’ll have a copy of my own book to bring, which will help.)

The kids have a TON of questions. When you’re presenting to adults or teenagers, you can ask them to hold questions until the end. That isn’t the case when you’re presenting to first-graders or even to fourth-graders, because they’ll lose interest if they don’t feel recognized. None of the kids seemed to mind if I answered with something like “that’s a great question, and we’ll get to it in a minute,” but I had to at least acknowledge their questions as they happened. There was one fifth-grade class where the teacher gave the kids a worksheet with questions about each presentation so the teacher would know they had been paying attention, and if I hadn’t answered those kids’ questions, some nervous little Ravenclaw would have been afraid of flunking because my presentation never mentioned how long it took me to become an author or something.

Remember being that excited about having a question in class? (Image via Flickr)

It’s not just the early readers who are fascinated by the publishing process. This year, I mostly had older kids, and none of them had given any thought to how a book goes from being a file on your computer to being a bound volume that you could buy at Amazon or Books-a-Million. Last year, my one fourth-grade class was more interested in hearing about how hard it was to get published than in hearing about how a rough draft becomes a book. This year, they were all interested in it. It probably helped that I included a little mini-lesson about illustrations and storyboards, so the artistically-inclined kids were fascinated. (Thank you, Shawna JC Tenney, for putting so much of your process on your website. And yes, I credited the heck out of you in my presentation.)

Illustrations give you a ton of activity possibilities. I prepared for an activity this year, but didn’t have time to get to it because there was so much to talk about. I’m going to include it here for other authors who need a career day activity, though.

I put the text of “Sing a Song of Sixpence” on the last slide of my PowerPoint (it seemed appropriate, since Mother Ghost is a sendup of nursery rhymes). My plan was to ask the kids to sketch some concept art of the characters. Do the blackbirds look angry that they were in the pie, or excited to be free? How big are they? Is the king happily counting huge piles of money, or is he grumpy because there isn’t as much money there as he thought? Is the queen eating an enormous plate of bread and honey or nibbling on a tiny snack? Do you want the maid to look mean so we don’t feel sorry for her when the blackbirds peck her nose, or is she a nice lady minding her own business?

If there was still time after that (ha!), I made a printout of a storyboard so the kids could plan the layout of their illustrations. 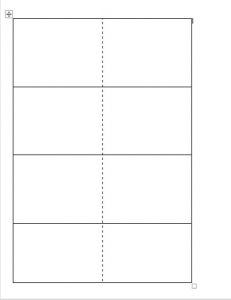 Four-by-two table in Word with a dotted line separating the columns. Easy-peasy.

I wish the presentation had been a little shorter so I could have seen what they did. Maybe next year I’ll pare things down a bit.

Wear layers. Remember how when you were in school, the math wing was subtropical and the social studies wing was a few degrees cooler than the Ninth Circle of Hell? School HVACs haven’t changed a bit. It was in the fifties on Career Day and I was sweating in short sleeves half the time. I’m just glad my favorite long-sleeved shirt was in the wash, because they would have been mopping me off the floor otherwise.

Once again, Career Day was a lot of fun. I’m glad I did it and I’m hoping to do it again next year (although the arrival of The Pumpkin might make things more difficult). And as always, if you have any Career Day tips that have worked for you, I’d love to hear them!