I’m still up to my eyeballs in getting this site back where it was, getting a PowerPoint ready for career day at my son’s school, preparing for my sister-in-law’s wedding, and–oh, yeah!–doing the last round of revisions on the novel. Since I have to repost all my Weebly blog entries individually (sigh), here’s my post about last year’s career day. Next week I’ll have some shiny new 2018 insights to add.

And, as always, if you can think of anything I’m missing, let me know before I go in to do it again on Friday!

My son’s elementary school held its career day last month, and because I actually have a forthcoming book to talk about–and one that kids will be allowed to read!–I signed up as a presenter. I knew that I wanted to be an author as far back as second grade, and I would have killed to have an author presenting at career day.

Unfortunately, authors are at a bit of a disadvantage when it comes to adding razzle-dazzle to our presentations. One of the presenters was a police officer who could show the kids his car; another was an architect who had the kids build bridges out of straws and marshmallows. (I consistently followed the architect, and it’s a testament to the teachers’ classroom management skills that the kids weren’t building bridges during my entire presentation.) Maybe I was looking in the wrong places, but I couldn’t find many career day tips for writers online, either. 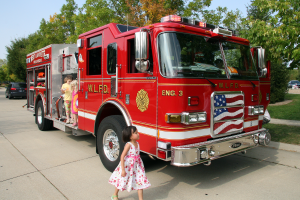 That fire truck is cool and all, but let’s talk about how to approach an agent! Right, kids? Right? (Image via Wikimedia commons)

Well, starting today, there’s going to be one more page with writer career day tips! Here are a few things that went right with my presentation, as well as a few things I wish I’d done differently. I also noticed some trends in what kids of different ages found interesting; while this was a pretty limited sample size, it may ring true in other schools. If you ever had a career day presentation as an author (or any other job that doesn’t lend itself well to visual aids and props), chime in with what worked for you!

The kids liked an interactive style. I peppered my presentation with a lot of back and forth: “What might be hard about not having a boss? What do you think is the main thing I do during my work day? How do you think we go from this [holds up pile of printed papers] to this [holds up book]?” I was a little worried that this would lead to a free-for-all–I remember times from my teaching days when I would ask a question that the kids liked, and ten minutes later they’d still be yelling out answers to that question–but here, it worked. No one did yell out answers to a very old question, and even if they had, it would have been a good gauge of what they found the most interesting.

(Side note: I told them the main thing I do during my work day was writing. The correct answer is more like “wasting time on the Internet,” but that’s neither here nor there.)

Any props are better than no props. Mother Ghost isn’t out yet, and my physically printed short stories are either inappropriate for little ones or featured side-by-side with stories that are inappropriate for little ones, so I didn’t want to bring in any of my magazines as visual aids. I brought in a copy of Harry Potter and the Sorcerer’s Stone to talk about the publishing process (“Then J.K. Rowling sent it to a company called Scholastic–see, you can see ‘Scholastic’ on the spine!”), Harry Potter and the Order of the Phoenix to talk about why it takes so long for some books to get published (“This must have taken a long time to write, revise, and edit!”), and Mummies in the Morning to talk about research (“What did Mary Pope Osborne need to research for this book?”). I wish that I’d had more props, although I don’t know what they would have been, but even those three props were a far cry better than nothing.

No, excited second-graders, these are just props. I only wish I wrote them. (Image via Wikimedia Commons)

Very young kids need lots of activities. My presentation was pretty talk-heavy, because again, I wasn’t sure what else to do. It worked well with the fourth-graders and second-graders. Predictably, it didn’t go over so well with the first-graders and kindergarteners (I wasn’t scheduled to present for third or fifth grade). The kindergarteners in particular were about to start vibrating into another dimension, although that was partly because I was the last presenter before recess.

Next time, I’m going to try to find some kind of activity that I can do for all the kids, but especially for the little guys. One possibility is to give them a writing prompt; another possibility is to give them a sample of the text of a picture book with no illustrations, then having them make their own illustrations as an example of storyboarding and making dummies. If any other career day veterans have suggestions, though, I’d love to hear them. My teaching experience is with middle school, so this age group is outside my comfort zone.

Early readers are fascinated by the publishing process. I had more second-grade presentations than any other, and they were all fascinated by the question of how a book goes from a file on the author’s computer to a printed, bound, and illustrated volume on a bookshelf. It was pretty clear that they’d never thought of that before, and realizing that someone actually has to make that book was pretty mind-blowing. Nearly all of their questions were about the publishing process–who actually binds the book, how does the book get illustrated, how long does it take, etc. I even had a question about typesetting from an eagle-eyed kid who noticed that the font in Harry Potter is different from the font in Magic Tree House.

Older kids want to hear about your failures. I only presented to one class older than second grade, so again, the sample size was tiny–but the fourth-graders really wanted to hear about my failures and frustrations. Some of them had started to think seriously about being authors themselves, and they wanted to know that their first rejection letter wouldn’t be the kiss of death. They wanted to know if I ever got rejected, how long I had to try before I got published, whether I ever got frustrated as a writer–all of those things that could reassure them that, yes, they have a shot even if they aren’t Stephen King right out of the gate.

I am so using PowerPoint next time. The presentation was fine for the second-graders and up, but giving the younger kids something to look at would have been really helpful for them. I like Shawna JC Tenney’s page on making a picture book dummy as a possible visual aid. I may not be an illustrator, but showing illustrations to younger kids will be a heck of a lot more engaging than showing them my rough draft paragraphs, my final draft paragraphs, and my paragraphs after a professional editor got hold of them–although the fourth-graders would have eaten that up with a spoon.

Overall, Career Day was an absolute blast, and I’m definitely going again next year. Has anyone else had experience with Career Day presentations to younger kids? What worked for you?